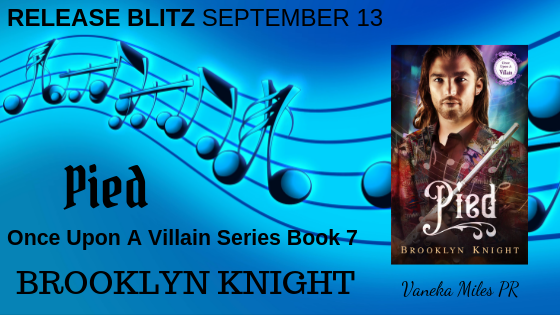 She cannot see me, but she can hear me; and that is all I’ll need to make her fall in love… with me.

Everything I’ve ever needed, is right here in my Paradise, including the whining brats I led away from their parents eons ago with my magical flute; but when that sorceress, Celeste Dubois, shows up and suggests that things need to change – that I need to change, I know she has lost her mind. That is, until she presents me with a brown beauty named Melodie, who awakens something deep inside me with her own music. I thought I had everything, but suddenly, I’m considering that maybe I don’t. I’m full of magic and music, but will those be enough to win Melodie’s heart? Especially when she learns that I’m the villain she despises from the folktales of old?

I can’t see him, but his music is like magic, and it restores my belief in true love.

Patrick appeared out of nowhere – not that I can actually see him, but the aura and the vibe he carries is unlike anything I’ve ever experienced. Sometimes, I think I can actually see his radiance, and when he plays that flute of his, the sound is like healing magic. But my son, Rafael, has reservations. He says he recognizes Patrick from somewhere, though he’s not totally sure. Rafael is my eyes. I want to follow his lead, the way I always do, but Patrick is like magic, and his music is beckoning me closer…

**READER ALERT**
This story contains extremely passionate and descriptive sex scenes. Not suitable for readers under the age of 18 years, or those who may be offended by somewhat graphic descriptions of sexual encounters. This story also contains scenes which include expletives. Brooklyn’s characters exhibit real emotions and desires, and though she is their creator, she is also very sensitive to their needs and wants, and works in partnership with them to create their unique HEAs.

***Each book in the ‘Once Upon A Villain’ series is a standalone. This series does not have to be read in order. Be sure to read the other books in the series here.***

Brooklyn Knight was born and raised in the beautiful islands of Bermuda, where she currently resides. She is the mother of three and the wife of one.

By day, Brooklyn uses her Clinical Mental Health Therapy Master’s degree and works as a high school Adjustment Counselor. By night, after family time, and after every one is fast asleep, she burns the midnight oil completing assignments for her doctoral program and designing characters to go along with the narratives in her head.

Since self-publishing her debut-novel in July 2018, she has sold almost 10,000 books, accrued more than 1.6 million page-reads in Kindle Unlimited, been invited to international author conferences and expos, and has been featured on local and online radio programs and podcasts. She is the founder of 16 Weeks to Published: The Ultimate Writer’s Workshop, where she assists aspiring authors in achieving success with their own stories.