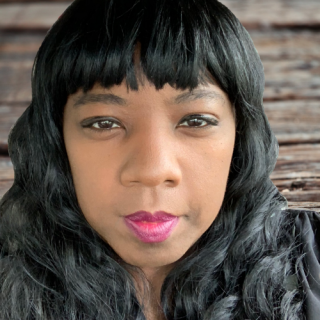 Meet Marian
Award-Winning Author and Speaker, Marian L. Thomas, has penned five women’s fiction novels to date. Her books have been seen on national television stations such as the Oprah Winfrey Network, Ovation, and the A&E Network. She has been featured in print magazines, newspapers and a guest on local, national and online radio stations. For her book, I Believe In Butterflies, Marian ranked among the top 100 Most Popular Authors in Literary Fiction on Amazon. She spent most of her teen years in Oak Park, Illinois, but now resides in a suburb of Atlanta with her husband. She enjoys a good bag of popcorn, a plate full of pasta, and a grape pop. 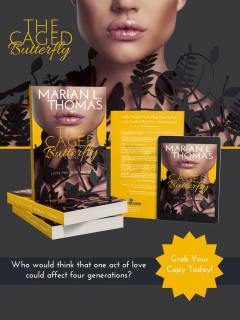 About The Book
The Caged Butterfly by author Marian L. Thomas is the heartrending story of the Mayfield/Taylor family spanning four generations ranging from the 1930s-1990s. While the character-driven plot touches on relevant social issues such as child abuse, racism, skin bleaching, and suicide, ultimately it is a story of love and forgiveness.
The book begins with Addie Mayfield’s loving letter to her unborn child which plays a central theme throughout the plot. As the story unfolds, the reader is introduced to Addie’s mother, son, and granddaughter: Millie, Timmy, and Nina. Alternating between the cities of Georgia, Chicago, and New York, and told through first-person narratives by each character, the plot follows the family’s history, relationships, triumphs, and sorrows. The book emphasizes self-acceptance, forgiveness, and redemption regardless of life’s hardships.
Connect Socially
Website      Facebook   Twitter Instagram
Purchase Copies
Amazon    Barnes and Noble

More About the Book
The Caged Butterfly by Marian L. Thomas, is a fictional story that follows three characters as they navigate life’s often rocky terrain in search of hope, courage, and forgiveness.
One of the main characters, Nina Taylor—is convinced that having white skin is the only way to make it successfully in the entertainment industry and thus begins bleaching her skin to hide her black heritage.
“At the heart of Nina’s story, lies a very dangerous obsession that has become an authentic reality for young women today, ” Thomas stated.
The Caged Butterfly is the third contemporary fiction book that Thomas has written that broaches on the issue of race. The other being- I Believe In Butterflies. She said: “The Caged Butterfly provides an imitate look at a young woman who must go through the caterpillars of life to learn that one must love the skin they’re in. It’s a tough lesson for Nina, but the end is beautiful.”
Audio sample
Click here to listen to a reading from The Caged Butterfly
Tour hosted by Write Now Literary Book Tours