Hello! I’m excited. This is one of my stops during the two week tour for Put It In Ink by Danyelle Scroggins. This virtual book tour is organized by Write Now Literary Book Tours. This tour runs August 7-18, 2017.
Follow the tour here

Nikiya Barnett aka Nikki, is still secretly suffering in silence concerning losing the love of her life, Raja Abrams. She desires total healing from God, but somehow seems to be stuck in her heart and mind. She alongside her two best friends who happens to be her coworkers, are trying to make Salon Select the new ‘it’ spot but this does not happen until they invite God in, by way of Sappora Ink.

Sappora Ink is the new blog talk show host with a show entitled, RFRT~Real Folks, Real Truths. Sister Ink is a straight to the point, raw, doctrinaire Christian girl trying to help her friends in this sinful world. She is changing the world one show at a time, and taking Shreveport by storm with the help of Nikiya Barnett, the owner of Salon Select, who has opened her salon as a hosting spot. Little does Nikki know, Sappora is closer to Raja than she thinks?

Raja is stuck in a world wind of adversity that he seems to have created for himself. Through R.A.B.~ Raja Abrams Broadcasting, he is trying to secretly make Nikki aware that their time together was not a waste, but will his method be the same method used to change his life forever?

Things happen when we choose to let God in. Whether we appreciate His ways or not, we must remember, His ways are not our ways. Will life change for the better for Nikiya and Raja, or is the plan that has been laid before them all a part of God’s plan?

Pastor/ Author Danyelle is the Senior Pastor of New Vessels Ministries North in Shreveport, Louisiana. She studied Theology at Louisiana Baptist University, has a Psychology Degree from the University of Phoenix, an Interdisciplinary Degree in Psychology /Biblical Studies from Liberty University, and is presently working on a Master’s in Religious Education from the Liberty University. Pastor Danyelle owns Divinely Sown Publishing LLC and is the author of both Christian fiction and non-fiction books. She is the wife of Pastor Reynard Scroggins Sr., the mother of three by birth and two additional by marriage.

Describe yourself in three words.

I normally start my day off with prayer then it is off to work. I normally try to make sure my day is productive and that I am strategic about everything that I pushed my hands to do. After a full day of working, I come home and transition from Author/Pastor to Wife/Mother.

This year I want to publish the first book from my children’s book series, The Gat Pack. Another thing that I am doing this year that I did not do last year is move strategically. I was so busy last year and when I looked back, my money, nor progress equaled my exhaustion.

What television show best describes your life and why?

There is really not a television show that describes my life but there are programs that describe my life on TBN. My life is filled with ministry and the assignments associated with being who I am.

What’s your favorite quote & why?

“But as it is written, Eye hath not seen, nor ear heard, neither have entered into the heart of man, the things which God hath prepared for them that love him.”  ~Paul

What character in your new book could you most relate to?

Nikiya is a lot like me because I experienced the same type of heartbreak with someone whom I just knew I would marry. Like her, I poured all of my energy into something greater and I expected God to move. I wanted to be sure that when God did move, I would know that it so I prayed for discernment.

Tell readers about your latest release.

Put It In Ink is about a young lady named Nikiya Barnett who thought she was going to be the wife of the love of her life, Raja Abrams. All of her dreams and visions shattered when she found Raja in a compromising position with the lady who is now his wife, Monica Abrams. Nikiya (Nikki) moves forward trying to pick up the pieces of her shattered heart by pouring all of her time and energy into building a chain of Salon Selects.

Raja, is trying to adapt to his new wife and his new life and soon to be status of a father. He finds that his happiness is compromised because his wife can not let his past with Nikiya go. In search of finding deeper meaning, he hires a talk show host for his blog talk radio station named Sappora Ink. Sis. Ink, not only changes Raja life, but she touches Nikiya, her co-workers, and her patrons.

What’s next for you?

I am getting ready to release a title featured in an anthology entitled Enduring Love this year, and I am also working on my first Christmas release. So, I guess you can say, “More writing, more preaching, and more living.”

What song would you use as the soundtrack of your life and why?

I would definitely use Way Maker by Sinach Joseph as the soundtrack of my life.

Sometimes I have to remind myself who HE truly is and that regardless to what it feels like, Jesus is a way maker, miracle worker, promise keeper, and a light in the darkness.

Excerpt
Nikiya “Nikki” Barnett
Nikiya Barnett, known to shop patrons and friends as Nikki, was eager to tune in to RFRT with Sister Sappora Ink. The blog talk show previewed for the first time the past week, rating high and considered a hit by reviewers. As far as Nikki was concerned, the world needed someone who would tell the truth, live the truth, and share the truth, even if it were a blog talk show host.
As explained, Sister Ink answered questions about relationships, and although honest, she was raw. Against her will, Nikki listened to blog talk shows often blaming the desire to be a good best friend for this phenomenon. A couple of them were worth listening to, but some were uninformative and a useless waste of time. The hosts were inexperienced or too pretentious to explain life’s circumstances with realness and clarity. They failed to solve problems or share foundational truths from the Gospels, as Chelle declared Sister Ink did.
For the first time, Nikki’s curiosity about a show’s review ignited interest and Nikki refused to miss it. Intent on judging for herself perhaps sparked the motivation. It may also have been the desire to understand how she lost the love or her life or the need for spiritual advice. Either way, Nikki would be in the front of the computer, with an open mind centered on Sis. Ink.
The only dilemma was making it home on time. Nikki’s solution may not have been perfect but it was plausible. She drove 85 in and 70 mph zone, praying the angels would blind the police. The inability to afford another speeding ticket should have detoured Nikki from breaking the law, not to mention how dumb it would be to get a ticket resulting from rushing to hear a talk show, but it didn’t. With long hair weave blowing, as the wind whipped through the windows of the car, Nikki uncaring and unconcerned bobbed and sang along with the music. We are conquerors, conquerors.
Driving fast, the “zooming” of the other passing vehicles warranted a rear view mirror check. Dang Nikki! The thought was not a result of a police approaching, but the reality of looking at a calescent mess. Nikki snickered, but noticed the children in the car to the left laughing and pointing their fingers. Nikki licked at the children and then sped past them. 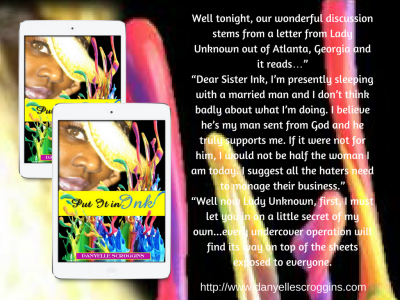