Widow Timberlynn Barstow is pregnant—not by her beloved husband, but by the man she holds responsible for his death. Big, blond, infuriating Sawyer Ellison has returned, demanding to be part of the baby’s life and hers. But he is still consumed by his war on drugs, ruthlessly disregarding anything that gets in the path of his quest, including those around him. Timberlynn’s uncharacteristic surrender to that beautiful stone-carved face and rock-hard body means much less than her child’s safety.

Sawyer Ellison harbors a deep hatred of drugs…and an even deeper secret. He wants to make Timberlynn his, yet his personal crusade is everything. It drove him to decisions he regrets, mistakes that haunt him unto this day. Yet he cannot grieve over being with Timberlynn. The banjo-playing beauty—and now their child—is everything he never dreamed he could have. Now it’s just a matter of paying the piper.

Sawyer stood in front of the driver’s side door and nailed her with a glare. “Is that baby mine?”
“Really?” Timberlynn looked up. “It’s fifteen degrees and starting to snow. You want to have this talk here in the parking lot?”
Sawyer yanked her car door open. “Get in.” He waited for her to get in the car and then got into the passenger seat. She turned on the engine and started the heater. Sawyer turned to face her. “Is this better?”
“Much.”
“Then let me repeat the question. Is the baby you’re carrying my child?”
Timberlynn’s mind raced. Could she get away with telling him an outright lie? Or would it be better to try and bluff her way out of this? “I don’t think that’s any of your business,” she said stiffly.
“None of my business? Lady, if that bump belongs to me it damned well is my business.”
Timberlynn looked over at him coolly. “Sawyer, this baby does not belong to you. He has never belonged to you and he never will. This is my child, mine and mine alone.”
“Yours and who else’s?”
“Mine. It doesn’t matter who donated the sperm.”
Sawyer took a deep breath. “Then let me put it this way. Did I donate the sperm for your little project? Did I get you pregnant back in July? And don’t try to lie about it. I can count as well as the next horny idiot.”
He was right. There was no point in lying. “Yes, you donated the sperm for this little project, as you put it,” Timberlynn said tiredly. “We were too drunk to think about birth control. Not that I had any on me, anyway.”
“So when did you plan to tell me I’m going to be a father?”
“I wasn’t.” Timberlynn lifted her chin. “Because you’re not going to be. I’m not involving you in this baby’s life. I’m not even asking you for child support. I just want you to leave me alone to raise my child.”
“How in the hell do you expect me to live with that? How do you expect me to know I have a child out there and not have anything to do with it?” Sawyer’s anger burned over her in the tight confines of the car.
But she was angry, too, and let him know it. “How in the hell do you expect me to do otherwise? Do you honestly think I want my child to have a father like you?”
“What do you mean, like me?” Sawyer’s voice was dangerously quiet. “Maybe you’d better explain that.” 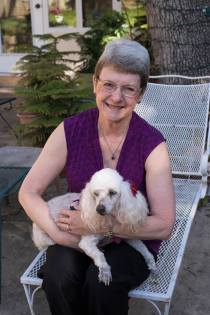 Author of over thirty Romance novels, Emily Mims combined her writing career with a career in public education until leaving the classroom to write full time. The mother of two sons, she and her husband Charles split their time between central Texas and eastern Tennessee. For relaxation she plays the piano, organ, and dulcimer, and is trying to be a dab hand at a few other instruments.
She says, “I love to write Romances because I believe in them. Romance happened to me and it can happen to any woman – if she’ll just let it.” Emily loves to hear from readers. You can find her here:
Website| Facebook| Twitter