Hi everyone!! Rhonda Bowen stops by my blog today during her Under Covers blog tour! 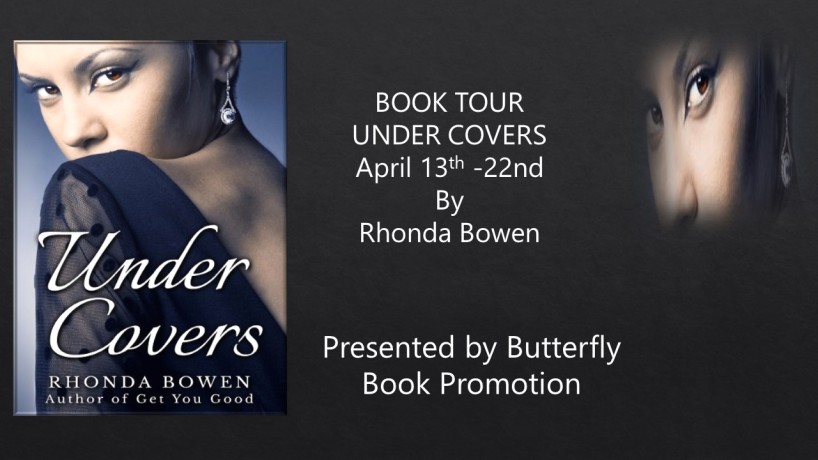 Purchase Link :
Amazon:
http://www.amazon.com/Under-Covers-Rhonda-Bowen-ebook/dp/B00UPOZZ4W/ref=sr_1_1?ie=UTF8&qid=1428688080&sr=8-1&keywords=Under+Covers
Barnes & Nobles:
http://www.barnesandnoble.com/w/under-covers-rhonda-bowen/1121462180?ean=2940046635539
Blurb:
Naomi Savoy is five days away from marrying Jordan Lennox, the man of her dreams, when she is faced with her worst nightmare. Her sister is missing. When her search for her sister sets her on a path into her past, she is forced to ask for help from the last person on earth she ever wished to see again – Garth Duhaney – a man she has both loved and hated for most of her life and whose power over her she has never been able to break.

Jordan Lennox knows his wife-to-be is hiding things in her past. But his love for her keeps him believing that one day she will come clean. But when the secrets force him on a trip across the ocean only days before their wedding, he begins to question whether love is really enough.

Will love keep them together or will it all fall apart when everything is uncovered?

His voice was rough. It hit Naomi like the bark of a tree against her bare back. When she turned to look at him, she found that he looked just as wild, the uniform and all it represented did nothing to tame him. Dark eyes, the color of coffee, stood out against nutmeg toned skin. Naomi had thought that officers were required to be clean shaven, but with the deep shadow on his square jawline, Naomi saw that Garth still broke the rules. But the scruffiness didn’t take away from him at all. He was still as handsome as she remembered. That never changed.

“Garth, wow, a uniform,” Latoya said dryly. “Never seen you in one of those before. Does it help you remember that you’re a cop?”

“Nice to see you too, Toya.” His tone was dismissive, partly because there was no love lost between the two of them, but mostly because he was too busy staring Naomi down. And as she stared right back without flinching, Naomi suddenly knew exactly why Natasha and Latoya were concerned. Truthfully, they had every right to be.

Waves of hot and cold rushed over her. Her mouth felt dry. Naomi was sure that at any moment she would start shaking.

She remained rooted in place as he slowly strolled over. Garth closed the distance between them until he was so close, she had to look up at him. Naomi could count the tiny hairs on his week old stubble if she had the time and was so inclined.

“I knew you would come back.”

Rhonda Bowen knew she would be a writer as early as eighth grade when she wrote her first novel with a classmate in a dollar notebook. While waiting for the day to come she completed a degree in Communications and spent a few years working in Public Relations and Event Planning. Throughout this time however, her desire to write stayed alive. She eventually completed her first novel, Man Enough for Me, which was released under Kensington Books’ Dafina imprint in February 2011.

Several years, a stint in Asia and a career change to youth work finds her still writing. She has written four romance novels and her books have been featured in PUBLISHERS WEEKLY and LIBRARY JOURNAL. Her latest novel Under Covers was released March 16, 2015. She writes about the themes of Real Life, Real Love and Real Faith, weaving stories about strong women who must deal with life and love without losing themselves. Sometimes they succeed, other times they make a mess of things while trying.

When not writing or being schooled on what’s current by the youth she works with, she enjoys chilling with her family, trying on shoes she can’t afford, bargain hunting online on Asian clothes websites and enjoying the great outdoors. Visit her online at www.rhondabowen.com , www.facebook.com/RhondaBowenBooks or drop her a note at rhondakbowen@yahoo.com.

2 thoughts on “Blog Tour- Under Covers by Rhonda Bowen”