Hi everyone! Congrats to Elizabeth Briggs, whose new release, More Than Comics, is now available! This is the second book in the Chasing The Dream series. 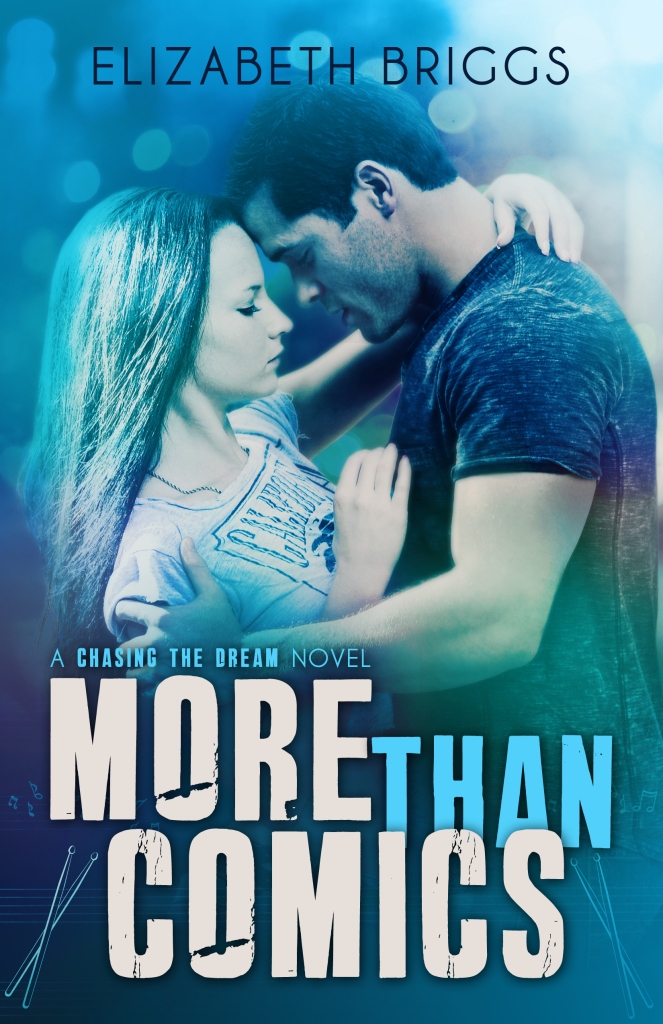 They’re friends online – but can they be more in real life?

Writer Tara McFadden has been friends with artist and drummer Hector Fernandez for years, long before his band became famous on reality TV – yet they’ve never met in person. They finally have a chance to connect offline when they’re both sent to Comic-Con to promote the graphic novel they collaborated on.

Hector’s secretly been in love with Tara for as long as he can remember, and once they meet, she sees him in a new light. All the years of longing lead to an incredible night of passion after one of his concerts, but neither is sure if their online relationship can translate into a real life romance – or if this will ruin their friendship forever.

Over four crazy days at Comic-Con, Hector and Tara must decide if they want a future together. But when their story seems to be over, it’s up to Hector’s entire band to make sure he and Tara get their happy ending.

The lights dimmed and the entire crowd seemed to jump to its feet at once, including me. Fog crept across the stage and a red glow slowly illuminated the darkness. The stadium was silent except for the buzz of excitement, the anticipation for the band about to come out. My chest was tight, my breathing difficult, my heart a speeding train that threatened to derail at any moment.

Just when I thought I couldn’t take any more of it, the room burst into sound with the opening of “Uprising” by Muse. The lights brightened, gradually revealing the band already on stage. Maddie on the right, her fingers flying across her guitar, the fake wind blowing her hair like in a music video. Kyle on the left, rocking out behind his keyboard, his black hair hanging in his eyes. And Jared in the middle, playing bass.

A spotlight flashed on him when he started singing. In person he was even more drop dead gorgeous than on screen, with his tattooed arms, sinful blue eyes, and naughty smile. His voice had a way of creeping into your very soul, and he had this crazy magnetism that made it nearly impossible to take your eyes off him. Especially when he wasn’t playing and could grip the microphone like a lover and croon into it. No wonder so many ladies threw themselves at him.

But while everyone drooled over Jared, my eyes sought out Hector, who had gone shirtless tonight. It was harder to see him in the back, but I could still glimpse his muscular arms and shoulders while his drumsticks danced through the air. He was an animal, pounding against the drums like he was possessed by something, yet somehow never completely losing control.

The big screens beside the stage flashed between the different band members and showed Hector from behind, giving a shot of his smooth back, all those coiled muscles flexing and rippling while he played. Sweat slicked his arms as he poured himself into the music, his drumsticks moving fast yet never missing a beat. He was glorious. Strong. Powerful. And ridiculously sexy.

I wanted to lick the sweat off him, which was sort of gross, but I didn’t care. I’d do it to taste him, to explore that hard, muscular body with my tongue. And my hands. And every other part of me.

I couldn’t deny it any longer. Meeting Hector in person had awakened something in me. I’d always found him hot, of course. And sure, I’d fantasized about him a few times, but I’d never seriously thought of him as anything more than a friend. He’d always been too far away, too off limits, too impossible to even consider. But now he was more than a daydream I tried desperately to ignore—he was a very tempting reality.

Once we’d come face to face a flick had been switched, and I felt something…more.

And seeing him play tonight? That made me want him. 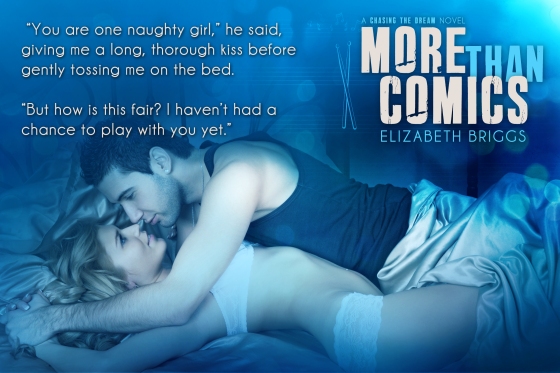 Check out the music playlist, which is available on Spotify:

To celebrate the release of More Than Comics, the first book in the series, More Than Music, will be on sale for $0.99 for a limited time: 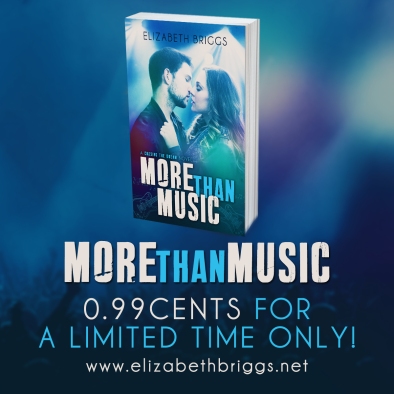 Elizabeth Briggs is a full-time geek who writes books for teens and adults. She plays the guitar, mentors at-risk teens, and volunteers with a dog rescue group. She lives in Los Angeles with her husband and a pack of small, fluffy dogs.
Author links:
Website: http://www.elizabethbriggs.net/
Facebook fan group: https://www.facebook.com/groups/ElizabethBriggsFans/
Newsletter: http://smarturl.it/elizabethbriggs
Twitter: http://www.twitter.com/lizwrites
Advertisement