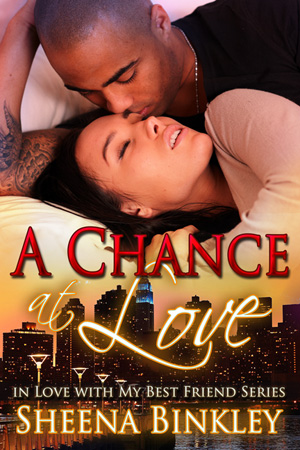 The wait is over!!! The cover for A Chance At Love is available!! This is the second book from the In Love With My Best Friend series.

Tia Simmons has been happily dating Eric Taylor for the past 6 months, and could possibly see a future with him. He’s everything Tia wants in a man- smart, funny, and extremely sexy, but she feels something is missing in the relationship. Until she finds what she’s looking for, she’ll be with Eric as long as she can.

Charles Robinson always dated women without the concept of falling in love. He doesn’t even want to think about the word considering he was at one point in his life. When his ex arrives claiming she wants another chance with him, he starts to rethink the notion that love is not a bad thing.

Although the two are living their lives, they both are centered around their best friends, Camille Anderson and Trevor Williams, who are madly in love. Seeing the two together put their own lives in prospective and wonder if their lives are where they should be; but there is one problem that have plagued them both.

Tia and Charles have known each other since high school. They were actually good friends, until one night changed their relationship forever. After that night, the two have been distanced, causing them to snip at each other any chance they got. But when a new merger unexpectedly puts Tia and Charles in the same company, the two have to come together not only for a big account, but also to settle their differences before both are out of a job.

Through a string of events, including a drunken night out, a game of strip Twister, and a wedding, the two realize that love can come when they least expect it.

(Although A Chance At Love is a sequel to In Love With My Best Friend, the book is considered a stand alone book and can be read separately.)

A very special thank you to Tara from Fantasia Frog Designs, who created this wonderful cover.

A Chance At Love will be available on Amazon & Barnes & Noble in January 2014!!